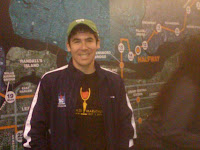 We have a new champion for title of "Kenny's Favorite Marathon." Congratulations, New York City Marathon, for grabbing the title away from my previous favorite. Actually, and let me be clear, I simply had the most fun at NYCM than in my previous marathons. For number 14, NYC was low-pressure, since I knew I wasn't going all out because I PR-ed five weeks ago at Wineglass Marathon in Corning, NY, with a 3:13. My 3:26 in NYC was solid, and I ran it without a watch (accidentally checked it in my bag and when I realized and tried to get my bag back was told it was too late). For a marathon with over 45,000 runners, they did a very good job top to bottom. The crowd support was fantastic, the organization was great, and the course was top-notch. 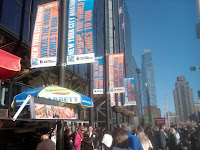 The expo was well organized if crowded. I went there on Saturday to the Javits Center to pick up my packet. They ran out of small shirts so I had to settle for a medium. Why they didn't plan properly for this confused me, but the shirt looks good even if it looks a little big. 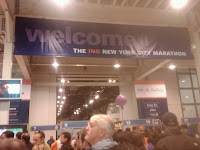 Inside was crazy. There were many people who traveled from other countries to attend and they swarmed the expo. I can't recall the last time I had trouble finding someone whose primary language was English! But, it was neat to see so many people excited to run the NYC Marathon, and I found myself included among the excited! 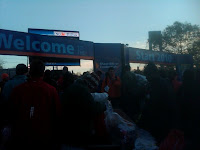 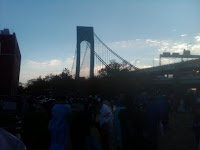 The marathon started on Staten Island just before the Verrazano Narrows Bridge and winds into Brooklyn where it spends almost half the marathon. A long stretch runs along 4th Avenue. I just decided to run what I thought I could and was holding steady around 7:30s early on. I think I picked up the pace when my friend, Chris Sabatini, jumped in around mile 9 and stayed with me until the halfway point. Entering Manhattan was very cool and I resisted the urge to speed up. I ran down towards the Bronx with a smile on my face most of the way - I was loving it. In the Bronx, I determined that because so many Red Sox seasons had died there, my marathon would not die in the Bronx! And it didn't! I plowed through the sparse sections of the Bronx until I was back in the city. But, with 35K to go, I started to feel it and my pace must have dropped off, as my splits indicate. I kept churning my legs in Central Park, but I had nothing left except a late sprint at the end, not enough to get in under 3:26 (I stopped to pee for 20 seconds, so let's call it 3:25).

After the race, they make you walk for another mile with just tin foil as you get cold to grab your bag. I found this girl I spoke with in the coral going to Harvard law and we chatted for a bit. She thought it was it 2:45 and was running late, but I reminded her of the time change. After, I grabbed my stuff, changed into my Patriots jersey and headed to meet my friend Deron at a bar in the financial part of town to watch the Patriots embarrass themselves against the lowly Browns. At least I could celebrate with some nice Brooklyn Lager! 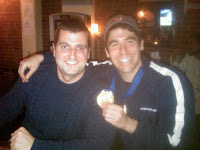 After, it was on to Chris and Gwen's to pack, load up Sammy, and head back to DC. Not a bad race! 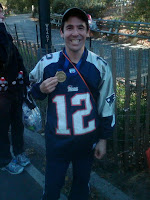 New York City was a fun race to run. What I enjoyed the most was the crowd and the city. I had a ball running without my watch (I accidentally checked it), and since I PR-ed five weeks earlier with a 3:13, I was free of time and could just enjoy the run. I enjoyed running about six miles to the halfway point with my friend Chris Sabatini. I loved running down into Manhattan. I remember when it got tough as I entered the Bronx thinking, "So many Boston Red Sox seasons have died in the Bronx - my marathon won't!" And I ran well through that three mile stretch - only to die once back in Manhattan. Central Park was grueling and I couldn't wait for the finish line. I tried to finish strong, yet just missed a 3:25 by seconds - but 3:26 is certainly great for a run in which I ran just for the enjoyment. After, I got a beer and watched the Pats lose to the Browns at a bar with Deron. Not a bad race!
Posted by Brookland Runner at 9:21 PM