Twelve States (CA, ID, OH, GA, VA, MD, PA, NY, RI, MA, MN, and now UT) and twenty marathons completed.  I can recall what a big deal I thought it was when I finished my first marathon, the 2004 Marine Corps, and now I'm at a point where I'm running three or four a year along with several other distances.  The early doubts I faced are faded and now I eagerly look forward to each opportunity to add a new state to my list, qualify for Boston again, and try to set another personal record.

My quest took me to a small town in Utah just a two hour drive from Las Vegas.  Accompanied by three other DC Road Runner Club Members and a friend from New York City, we embarked on our journey to conquer the rolling hills (mostly down, but some up), of St. George. 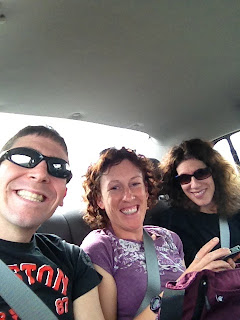 (Riding with Courtney and Janet)

The backseat can be a great place to bond while en route from Las Vegas to St. George, UT.  We made it to the expo in just about two and a half hours, stops included.  Once at the expo, we were mostly all business-like, picking up our bibs and goodie bags.  It was neat to have a low number and be considered an elite runner for this race.  We scarfed down the pasta dinner at the expo since we didn't want to venture around the town in search of a place.  I overstuffed myself (I have to work on this at future races) and then we went to our room to check in and turn in for the night.  After watching the O's win the wild card game, I went to bed. 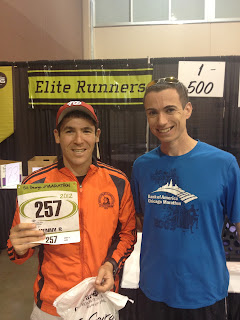 (Bib pick up with Adam)

I woke up around 3AM on my own, a good thirty minutes ahead of my alarm.  Kevin woke up soon thereafter and we packed and got ready to head to the start.  The hotel offered a decent breakfast where I could get a bagel and put peanut butter on it.  We drove down to the start line and parked and then had to walk a good half a mile to the buses that would transport us to the start.  We got separated and on different buses, so it was the last I would see of my group until after the race.  On the bus, I shared a seat with a nice, tall gentleman from Kansas who was a former Mormon.  We passed the time talking politics and religion and running - the trifecta of my favorite topics. 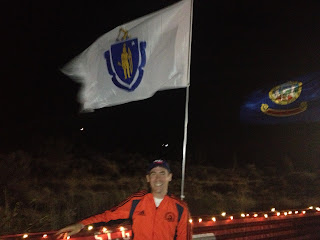 At the race, we were dropped off and I posed for this picture by my home state flag.  While I haven't lived there in a long time, I'm proud to be a Bay Stater! 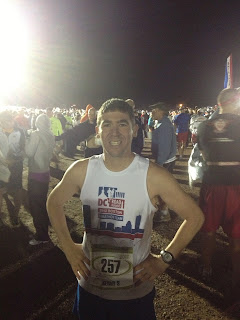 (Moments before the race)

I entered the coral minutes before the starting gun.  I heard after the race there was some outrage that the national anthem wasn't played - it was apparently an oversight.  But, I was so focused on the race, I really didn't notice.  The gun went off and we ran off into the night at around 6:45 AM.  The first few miles were in near-darkness: I remember thinking I wasn't at my projected pace as I couldn't see my watch.  I did run a slower-than-expected 7:09, but I was able to settle into my groove in a few miles.  Until mile 7, I was cruising, but mile 8 was a long uphill - the Veyo climb I believe.  The next few miles I just tried to hold equal effort.  I remember passing Adam around mile 12, right around the time the hills were done going up and started going back down.  The scenery was gorgeous and I made sure to take it in as well.

Around the halfway point I remember thinking that I was cruising and this would be a very good day if I could hold this.  I was on pace for 3:01/2 and hoped there were some big downhills to put sub 3 in play.  Mile 16 was my fastest as it was just a drop and I wasn't running as much as I was in a controlled fall.  After, the hills turned up again and my tight thighs made their appearance.  All race I decided to think about my Uncle Evan and Ronnie who passed this summer.  Uncle Evan's job was to take care of the hurt in my legs while Uncle Ronnie was in charge of my breathing.  It worked for the most part, especially in the last 10K where I started to slow, but in the 25th mile, Uncle Evan must have quit working as my legs just couldn't hold the pace and dropped down to an 8 minute mile.  During the last mile, Adam passed me and I tried to stay with him but it just wasn't possible.  I did manage to scamper across the finish line just under 3:05 to set a new personal best by six seconds and qualify for Boston for the third time, all three coming in the last thirteen months.  I finished 231st out of 5800 finishers - good enough to be in the top 4% 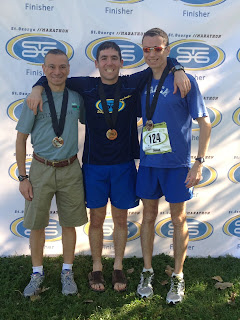 After the race, Kevin found Adam and me.  We drank some fluids, ate some food and ice cream and got our clothes.  We met up with some of our friends and Adam made a friend from NY.  Kevin ran his second best time in 2:52 and won 3rd place in his age group.  We had to wait around over two hours for the award ceremony.  But, we snapped some neat photos: 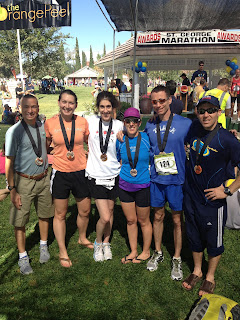 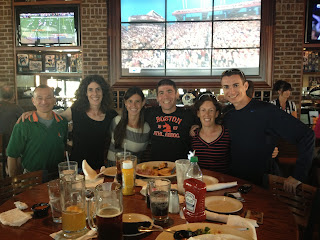 The race was fun, and I am glad I went.  We also happened to go to Zion National Park, but those photos and stories are for another post.
Posted by Brookland Runner at 12:02 PM