Boston Marathon 2017: The Finish Line Was Only the Midway Point

This year's Boston Marathon was more than just a race for me: it was also my first time traveling alone with Miles. Laura needed to go home to New Jersey that weekend, so I was able to prove that I maneuver the logistics myself. Saturday began with dropping Sammy off at our friends' home near 16th Street around midday, then I drove us up to BWI (a rental van was driving dangerously up 16th Street - I even called the number on the van to report his speeding and hitting the median), parked in the daily lot, folded the stroller to get onto the bus to the terminal, and dragged our luggage with us. I only took a bottle or two of breast milk and would be relying on formula the rest of the way. I was able to get the two of us checked in, through security (collapsing the stroller, putting the car seat through, and walking the two of us through the magnetometer) and got us to our gate in plenty of time. In fact, we sat down at a bar where I fed him a jar of food then fed myself Banza (chickpea pasta) since it was Passover. After eating, I walked us around the terminal several times until it was close to boarding time. Once on the plane, I was able to give Miles his own seat since it wasn't full - I just strapped him into a seat while he remained in his car seat. Once landed at the Providence Airport, we met my folks at baggage check and went back to Foxboro. Thankfully, my folks have a pack n play so I didn't have to travel with that. And, they bought food, diapers, and wipes to save me from packing that too.


Sunday morning, I went for a 20 minute run to Wolamolopoag and back to my folks' home. Dad and I went into Boston to get my packet while Mom and Auntie watched Miles. In Boston, I met up with Derek Bailey at the expo, got my packet, then met my dad. We didn't linger in town. I did buy a hat but nothing else.


We then drove to the Route 128 train station where we practiced the logistics for after the race pick-up. I even went to the platform and "limped" to the car as if I had just run the race. Then, we went to the Wegman's nearby and bought some wine and more Banza for dinner that night. We also stopped by Howie and Cheryl Lampert's and thanked them for lending us the bouncy.


At dinner, Amanda, Ryan, Auntie, Molly, Drew, and my friend David Gaffin joined my folks and me. The meal was nice and I ate plenty, as usual. After dinner, Miles had a huge poop, but he was able to still pose for nice pictures with Molly and David.

For the race morning, I woke up wondering if we're due for good conditions in Boston. Yet again, they were calling for warm temperatures. I talked with my coach and he thought that while it would be 60s during the race, we would get a tailwind that would cool us. That was my plan going into the race- try to aim for 3 or possibly 3:05 if the weather permitted. Dad and I left the house shortly after 6AM, and it was a good thing we did. Usually the off-ramp to the athlete's village at Hopkinton High School doesn't close until 7AM. But for some reason, a state police officer was already at the exit with cones blocking it off by 6:30. We went to the next exit, and it was the same. Dad pulled over just past the exit, I got out of the car to talk to the officer, and he saw my bib and let us back-up and go towards the start line. He didn't know why they ordered it closed so early.

Once at the Athlete's Village, I found a bench and laid down. I think I fell asleep. I remember when I woke I met a woman named Elizabeth from Baltimore who was finishing her master's in speech pathology from Marshall University. She had been inspired to get into the field because her friend's brother is non-verbal. I was waiting for PJ and Alex, who were traveling on the buses from Boston. We eventually met up minutes before it was time to head to the start line. I tried to convince Alex and myself that the weather would be perfect, recalling that my coach said while it was 60s, the tail wind would cool us. I think I did convince myself that would be the case. In the start corral, I met with Derek Bailey. We were in the fourth corral as his bib was 3800 and mine 3966. This was the first time I had ever been seeded so far forward. We saw Kevin D'Amanda. After talking and getting the jitters out of our system, the race began.

I started strong and felt comfortable. I ran smooth for the first two miles, but I quickly realized that it was warmer than they predicted since I was sweating into the third mile. There, I decided to pull back and aim for 3:05/10 and give up my PR goal. It would turn out to be a wise decision. The course was hot and the longer I ran, the warmer it was. I recall getting passed by Amanda and she asked how I was doing. I replied something like "not great" since I was upset it was another warm Boston Marathon. Then, somehow, she passed me again. I asked how that was possible and she apparently stopped to use a bathroom.

Most of the actual race was kind of a blur. I remember seeing the usual sites and towns. I took water and Gatorade at each stop - in fact, I dumped water on my head every chance I had. When I hit the hills of Newton, I didn't try to speed up, but rather just let them come to me and climbed them calmly and consistently. I know that when I hit the top of Heartbreak and started the decent by BC, I felt pretty strong and decided to see how fast I could hold my pace. I repeated over and over that I could at least hold a 7:30, my normal long run pace. I thought of a family member who was going through some pain and thought that if they could tolerate what they were going through, I could handle this tiny hurt. I remember flying by my father and Molly at Coolidge Corner, same place as last year, and knowing I could finish in a course PR. I thought going under 3:15 might be possible, but as I got closer and realized it was going to be 3:15-16, I just tried to get in under 3:16.

Finishing the marathon was a nice feeling. I had to pick it up at the end to make sure I got in under 3:16, which I did. I can now say that the marathon I have finished the most times is Boston with five. Four straight National Marathons (the predecessor to Rock N Roll USA/DC), three Marine Corps, two NYC, and two Philly.

I also placed higher than my bib, which was a goal. Wearing bib 3966, my overall place was 3848, so I at least accomplished that goal. And, I can never be upset with a course PR, even if I only cut off two minutes. But, it was the warmest day (except for 2012) that I ran Boston, so I am very pleased with my smart race.


However, finishing the marathon was only the midway point for me. I had to walk through the finish line chute and get to Back Bay for a 1:48 train (I finished around 1:20 PM). I caught the train and spoke to a nice elderly couple - he had run Boston years ago. On the train, people spoke to me about the race and congratulated me. When the train pulled into the station, I got off (my walk wasn't too sore) then met my dad at 2:08. We drove back to Foxboro quickly where I showered and finished packing. Mom made some leftover chickpea pasta and I loaded the car and Miles into the car. Mom and Dad drove me to the airport where I arrived by 4. There, I checked us in and a bag then took us through security (his car seat, stroller, and a bag) then fed him a jar of food while eating the chickpea pasta with my other hand! We boarded the flight, and he sat on my lap since the flight was full and had a lot of energy. The couple sitting with me was very nice and the wife (they were newlyweds) loved hearing Miles coo and seeing him smile. The woman behind us made faces at him. But, I was exhausted and had to play with him by bouncing him to keep him from getting whiny. I showed him NYC as we flew over and lifted him in the air and tried showing him Sesame Street. I fed him one bottle of formula which satiated him, but at the end of the flight he was getting fussy again. There was a "vial" of formula and I joked that it was only to be opened in case of emergency. With him fussing, I deemed it enough of an emergency to open and feed him. We landed, the shuttle bus took us to our car, and I drove to pick up my dog before walking into my house at 9PM. But I did it!

In retrospect, I talked to my coach who said I came up to the red line without going over; meaning I did a good job of running a consistent pace without exceeding what I could handle and bonking. I still had a good race left in me after the 21st mile, which was my goal. 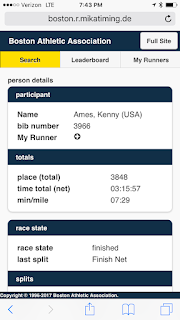 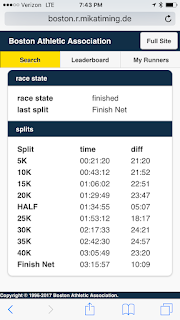 On Wednesday after the race, the New England Patriots came to the White House for their moment with the President then toured the Capitol. In Statuary Hall I said to Edelman "the best sign I saw in the marathon Monday was ATL 28 | NE 3." He said he saw that on Barstool. He asked how I did and I told him 3:15. Then I was about to ask him for a picture and he took a picture next to an Oklahoma statue and was whisked away onto the House Floor, so I didn't get a picture.

Next year, I hope Miles can actually watch me race the marathon and that we get good weather.

Posted by Brookland Runner at 11:39 AM