The Sox beat Detroit and so did I!

When I registered for the Detroit Marathon and booked my flight, it was in March of this year.  The baseball season was just getting started as players were in Arizona and Florida for spring training, and the likelihood of the Sox playing the Tigers for the American League pennant were extremely slim.  But, half a year later, when I arrived in Detroit the Sox were leading their best-of-seven series 3-2 with Game 6 slated for Saturday at 8PM, the night before the marathon.  The last time the Sox were in the ALCS, I ran the Columbus Marathon in 2008, and I was trying to get a good night's rest and not watch the game.  That time, I failed to get enough rest and was so excited the Sox had won to force a Game 7, that I probably was a little tired for the race.  This year, I turned off the game after the third inning with the score tied and laid in bed wondering what was transpiring.  I think I did fall asleep for an hour, but at 11:30, Laura woke up and I checked the score.  I saw it was the 8th inning and the Sox were up 5-2. I begged her to let me watch the last inning, but she reminded me I had to get my rest for the race.

That's how I ended up watching the final inning under the covers on my iPhone.  And, that's how I got barely any sleep yet still pulled off a 3:09:27, good for my fourth Boston qualifying time.  I had a decent race since I got good rest the week heading up to the run.  Even with the Sox in the ALCS, I got fortunate with a few things.  For Game 2, I had gone to bed with the Sox down 5-0 to wake up after midnight with my phone full of texts excited for the comeback win.  Game 3 started at 4 and when they won, Laura and I celebrated and went to bed.  For Game 4, it wasn't close so I went to bed early.  I stayed up to watch Game 5 and that win added years to my life, but I was able to sleep in a bit.  And, of course, Game 6 was the clincher.

Sunday morning, I felt fine even though I didn't have the best night's rest.  But, I knew from past marathons and Runner's World articles that it was possible to race well even if you didn't get full rest.  I've spent some past marathon eves with the jitters, so I knew that I'd be able to perform fine in Detroit. For my 24th marathon, I am finally confident that I know what I am doing... sort of.

I woke up at 4AM, three hours prior to the gun.  I did my morning routine and got breakfast at the hotel, which was just a few blocks from the start.  That was nice that I could watch the game recap on Sportscenter.  And, it meant I didn't have to check a bag.  I did bring a copy of my passport in a bag, but no one ever asked to see it.  The border police just needed to see bibs since when you checked in, you showed your passport.  When we checked in, Canadian border guys gave me a ribbing for my Sox hat.

I warmed up in my room, put me club singlet on, and brought a throw-away shirt to keep warm.  I headed to the starting corral and waited for the gun.  The first few miles, it was dark and I was just trying to find my pace, assess what I had, and plan my race.  I had hoped to go for a 6:45-50 pace which would get me sub 3, but my legs told me that wasn't going to happen.  So, I just decided to hold a 7 for as long as I could.  As we headed to the Ambassador Bridge into Windsor, Canada, I deadpanned, "Wait, are we going into Canada?!"  That got a few runners to show surprise - and I told them I was joking.  I like to make a few jokes if I get a crowd.  The bridge was tough, so I just held an even pace and made up for the lost time on the downhill.  Windsor was nice and the fans came out, but we were only there for a few miles before heading back through the tunnel.

When I emerged from the tunnel, I was booed for my Red Sox visor.  I turned to see it was a guy wearing a Yankees sweatshirt - he was teasing so I waved back.  Of course the only boo I got for my hat was a Yankees fan!  A few folks weren't pleased I was wearing the Sox visor, but so what - we had just won the ALCS and I was excited as we were headed back to the World Series against the St. Louis Cardinals!

When I hit the ten mile mark, I was feeling pretty good and thought just keep holding this pace.  At the half, I came across around 1:33 and knew I only needed a 1:35-6 to get another BQ and knew that holding a 7:15 average the rest of the way would do it.  And, I used my excitement for the Sox for positive thoughts that carried me and kept my mind off how I felt.  It wasn't until around 17 when I started to feel the wall, so I took a Gu, my third, and the feeling went away.  My plan was to Gu at 45, 90, 120, and 150 minutes.  And, that seemed to do the trick.

Coming back into Detroit, the wind likely stole 2-3 minutes, especially down the main road.  A volunteer spilled Gatorade on me down that stretch.  I ran over some bridge and around an island with the wind slowing me down.  I just told myself to keep churning the legs.  At mile 23, I was getting tired and that's when I had to go into my mental tricks and say I've come too far, I'm going to do this, and remind myself that "The Sox beat Detroit and so can I!"

I met Laura at the end of the race's exit and we went back to the hotel to shower and pack.  We met the gang for beers (I enjoyed a local brewery: Saugatuk Singapore IPA) and lunch at the hotel's sports bar then went to the airport.  Detroit was a nice trip, a good marathon, and I'm pleased to have completed my 15th state.  Next on the calendar: Huntsville, Alabama, in December! 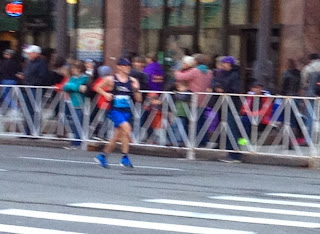 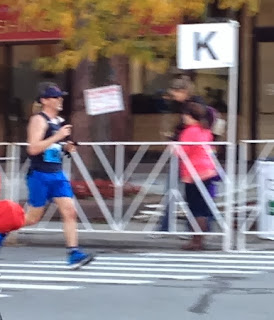 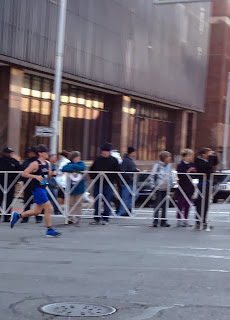 Laura took some photos of me finishing.  I like that she got me by the K corral - K for Kenny!